The X factor inside waste-free buildings


It’s not an understatement to say that Ged Finch’s innovations could totally transform the way we think about buildings. The Victoria University of Wellington PhD student is fast-tracking the commercialisation of his structural frame solution for waste-free buildings, with support from the KiwiNet Emerging Innovator Programme. 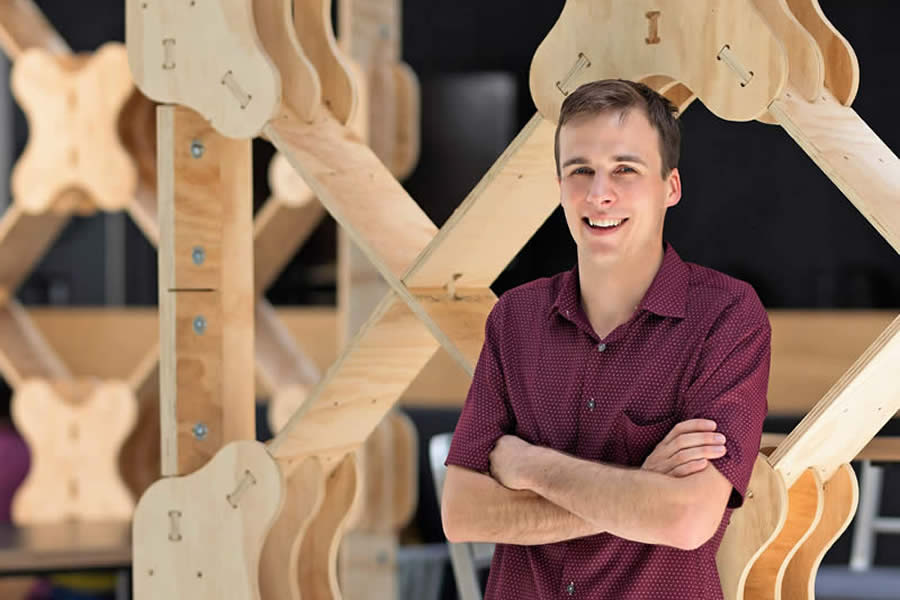 Approximately half of all New Zealand’s waste— about 1.6 million tonnes every year—is generated by the construction sector. Finch’s game-changing building design, a self-braced interlocking wood design that clips together eliminating the need for single-use fixings, has the potential to eliminate waste and reduce the amount of raw materials being used by the building industry.

Ged, with Wellington UniVentures’ support, is working to commercialise his framing system, which can be disassembled and re-used at the end of a building’s useful life, meaning zero waste. His work has attracted significant industry interest both locally and internationally, with businesses and investors backing his prototyping and independent structural testing.

In 2019, KiwiNet’s Investment Committee awarded Ged a place in the Emerging Innovator Programme and provided him with introductions to scientists from Scion, who are developing natural adhesives from forest waste products, plus network connections with Auckland-based company Fastmount, which manufactures reusable clips that connect interior wall linings with the structure. These materials perfectly complement Ged’s technology. KiwiNet also provided Ged with a business mentor, Rob Bernstein, to provide ongoing one-on-one advice. Ged describes these connections as “magic!”

Thanks to KiwiNet emerging innovator support and help from industry, Ged completed two major proof-of-concept prototype buildings in late 2019. The success of these prototypes was then leveraged to secure X-Frame a place in the nine-month Circular Economy Start-Up accelerator programme, run by the Innovyz Institute in South Australia. Now, with the help of Innovyz, Wellington UniVentures, and KiwiNet, Ged is in the final stages of preparing his Circular Economy building technology for market.