Forget the crystal ball — augmented reality technology that enables people to use their mobile phones to visualise their environments in the future as well as the past is picking up clients after being given a commercialisation boost through the KiwiNet Innovation Network and the Ministry of Business Innovation and Employment (MBIE).

HITLab NZ (Human Interface Technology Laboratory New Zealand), a University of Canterbury research institute, has been developing augmented reality (AR) technology for more than a decade. The technology provides a virtual view of the real world, blurring the line between what’s real (what we can see) and what’s computer generated.

With support from MBIE, HITLab NZ has developed Outdoor AR — a software platform that allows users to easily create their own outdoor augmented reality applications for mobile devices.

HITLab NZ’s director, Professor Mark Billinghurst, says as they were building the platform it became obvious there were commercial opportunities for the technology. So with assistance from MBIE’s PreSeed Accelerator Fund (PreSeed), allocated on the Ministry’s behalf by KiwiNet, HITLab NZ was able to explore the technology’s potential for commercialisation. 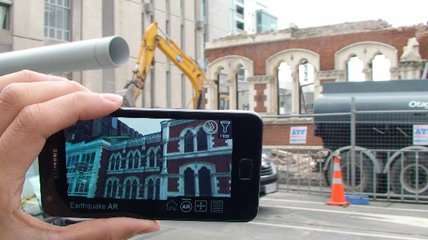 “Originally we thought the Outdoor AR technology could be sold outright, or licensed to particular market sectors,” says Billinghurst. “But in a landscape where competitors were already giving away AR software for free, we decided instead to focus on consulting opportunities and building applications based on the software.”

CityView AR, for example, is a mobile app that allows users to view Christchurch as it was prior to the quakes — putting lost buildings back on the streets where they once stood. While another app, CCDU3D, has been developed for the Canterbury Earthquake Recovery Authority to enable users to see how the city will look following the rebuild.

In August 2013 an app called High Street Stories, developed with assistance from the Historic Places Trust and Internet New Zealand, was released, allowing people to hear the stories of those who once lived and worked in what was once the commercial heart of Christchurch as they walk around the area.

Intellectual property (IP) generated through PreSeed funding has also been used in a project with BlackBay, a producer of enterprise mobility solutions, to explore how mobile AR can be used as a tool for couriers and other forms of delivery.

HITLab NZ has also gained a TechNZ grant to develop a custom mobile AR application for BlackBay based on the Outdoor AR platform.

“Support from KiwiNet and PreSeed is crucial for making such commercial opportunities a reality. One of the problems with research is it’s often a long way away from being in a state in which commercial people can use it and the people involved are speaking different languages.So if that funding is not there, that research is left withering on the vine,” says Adrian Busch, Research and Innovation Technology Manager, University of Canterbury.

“We have developed several proof of concept prototypes for BlackBay, which they have been able to show at trade shows and to potential clients,” says Billinghurst. “Most recently we’ve been working with them on the next generation of mobile applications.”

So what’s next for the technology?
Billinghurst spent four months on sabbatical at Google, and the lab is now looking at how its technology might work with Google Glass; the Outdoor AR platform is now successfully running on the Google’s wearable computer, which works via an optical, head-mounted display.

“It provides you with quite a different experience because now, instead of holding a device up in front of your face, you’re wearing it, so you can see the content around you the whole time. It’s much more immersive,” says Billinghurst.

Support from KiwiNet and PreSeed Investment is crucial for making such commercial opportunities a reality.
Adrian Busch, Research and Innovation Technology Manager, University of Canterbury