KiwiNet has supported the project with a $162,000 PreSeed investment, from their PreSeed Accelerator Fund (PreSeed) from the Ministry of Science and Innovation, to further prove the technology. WaikatoLink and Prima Group have matched this with a further investment of $162,000. 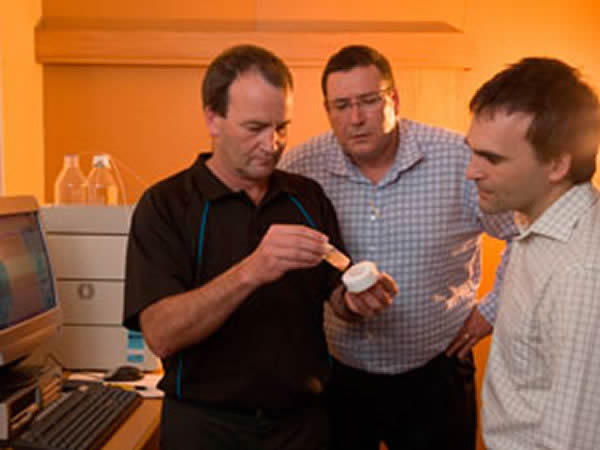 Terry Smith, John Luxton and Nigel Slaughter looking at a sample of the novel polymers

"We're really excited about this new technology. The removal and concentration of secondary metals will really add value to raw materials that can be used for agriculture. It will also extend the range of materials we can use in our products," says Dr Terry Smith, Process and Chemicals Manager at Ballance Agri-Nutrients Limited, New Zealand's leading fertiliser specialist.

The project draws on research from Wintec, Hamilton's technical institution, into the use of molecularly imprinted polymers as sensors to detect or measure the presence of a target material. In September 2011 WaikatoLink, the commercial company of the University of Waikato, partnered with Prima Group, Wintec's commercial partner, to develop new commercial applications for the technology. Industrial scale filtering was identified as an ideal application.

"Taking a collective view of the merits of various technologies has really paid off," says John Luxton, CEO of Prima Group. "Through KiwiNet we've been able to combine our expertise, tools and networks and develop a much stronger proposition collectively."

Ballance was signed on as an industrial partner for the project after seeing the potential of the technology for filtering large volumes of material in solution, which works in a similar way to a water cartridge. A laboratory has also been set up at Ballance with a researcher to further assist development.

"Industry input while still doing research adds great commercial value to a project. By getting an early steer from industry we can address problems and find solutions early which may be the commercial make or break for technology," says Nigel Slaughter, General Manager Commercial , WaikatoLink.

Mr Slaughter says that the fact that all parties had committed resources to the project and that it was already showing commercial promise helped the project succeed in securing the PreSeed investment from the KiwiNet Investment Committee. "The PreSeed investment really covers off the high risk stage of the development and allows us to develop a proof of concept product that's of interest to companies."

Mr Luxton says, "The technology has several unique selling propositions that make it attractive. The filters are reusable, capture down to parts per billion and allow highly specific binding. The other thing that is particularly satisfying is the opportunity for the commercialisation businesses of Waikato University and Waikato Institute of Technology to work collaboratively on a project that has such potential," says Mr Luxton.

Molecularly imprinted polymers can be designed to bind to a wide range of targets, including metal ions, proteins, phenols, peptides or steroid hormones. A molecular weight of 150Da to 1000Da is in the comfort zone for binding, though much smaller metal ions can be bound. Much bigger molecules such as proteins can be bound using a variation on the original approach known as epitope printing.

The polymer can capture about 80% of the targeted material from a flow, even when the targets are in concentrations as low as a few parts per billion. A system set up with banks of polymer cartridges in series would result in capture rates near 100%. Targets bound to the polymers are rinsed off by inducing a sudden pH change, producing a broth rich in target material.

The project runs until September by which point it is expected a pilot will be running at Ballance to process tonnes of material.