A new water purification technology which removes contaminants in water while simultaneously disinfecting it against microbial contamination has been developed by the University of Waikato with the support of WaikatoLink, the University's commercialisation company. The new electrochemical PEFT Cell technology which applies a low voltage current to contaminated water to remove contaminants is being developed for residential, commercial, horticultural and agricultural use. 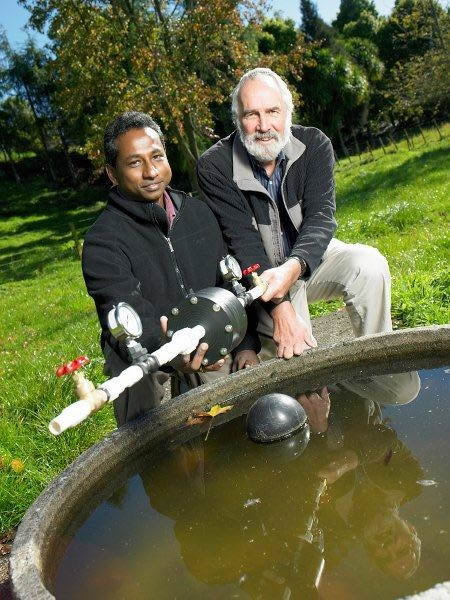 Nigel Slaughter, General Manager Commercial at WaikatoLink says, "Our initial focus for the technology is the removal of contaminants to provide clean and safe rural domestic drinking water supplies. Scale up for animal watering will also be a high priority. Our research indicates there is a good market opportunity for a low cost water purification platform that is a compelling alternative to existing solutions."

The PEFT (perforated electric flow through) cell works by applying a low voltage current to contaminated water that is forced through a novel perforated electrode system. Contaminants such as iron, manganese, arsenic and microorganisms are subsequently removed by a combination of oxidation, coagulation and precipitation. This is brought about by the generation of chlorine from naturally occurring chloride ions present in water and the high electric fields produced by the cell.

Jessica King, Commercial Manager at WaikatoLink says the technology has a number of advantages over some existing solutions which can be bulky, expensive and maintenance-heavy.

"While other electrochemical systems can provide chlorine on demand for water treatment purposes, they operate as offline devices using concentrated brine solutions and require specialised metering devices. Our system also minimizes the risk of harmful byproducts forming that can result from standard chlorination. This is due to the synergy between the high electric fields and the electrochemically produced chlorine which achieves markedly increased specific toxicity of the chlorine."

The technology draws on ten years of academic research at University of Waikato's Chemistry and Engineering Departments under the direction of Associate Professor Alan Langdon and more recently through the doctoral research of Dr Hilary Nath.

KiwiNet has supported the project with a $92,500 PreSeed investment, from their PreSeed Accelerator Fund (PreSeed) from the Ministry of Science and Innovation, to take the initial lab-scale proof of concept to a working prototype to demonstrate the potential. WaikatoLink has matched this with a further investment of $92,500.

Mr Slaughter says, "The KiwiNet PreSeed funding allows us to really tackle the high risk aspects of the project by undertaking rigorous technology development and gaining early industry input. The idea is that by the end of the project we will have a proven prototype and some good test data which will make the project ready for angel or industry investment so we can take the product to market."

The group is working with two New Zealand companies to manufacture prototypes. To develop this platform technology beyond the KiwiNet project, WaikatoLink is seeking partnerships with companies that have water quality issues with iron and manganese and/or microbial contamination.

A prototype will be on show at one of two University of Waikato stands at Fieldays later this month; the university is a strategic partner at Fieldays which this year runs 13-16 June.