A research project to advance a potential treatment for Alzheimer's disease led by scientists from Victoria University of Wellington has been awarded $392,000 from KiwiNet's PreSeed Accelerator Fund.

Professor Peter Tyler and Drs Olga Zubkova and Ralf Schwӧrer from Victoria's Ferrier Research Institute, and long-time collaborator Professor Jerry Turnbull at the University of Liverpool, have also been awarded a Alzheimer's Society UK grant worth over $450,000 (£260,000 GBP). A research grant of $15,000 for Dr Zubkova from the New Zealand Federation of Women's Institute, brings the total funding awarded for the research project to $850,000. 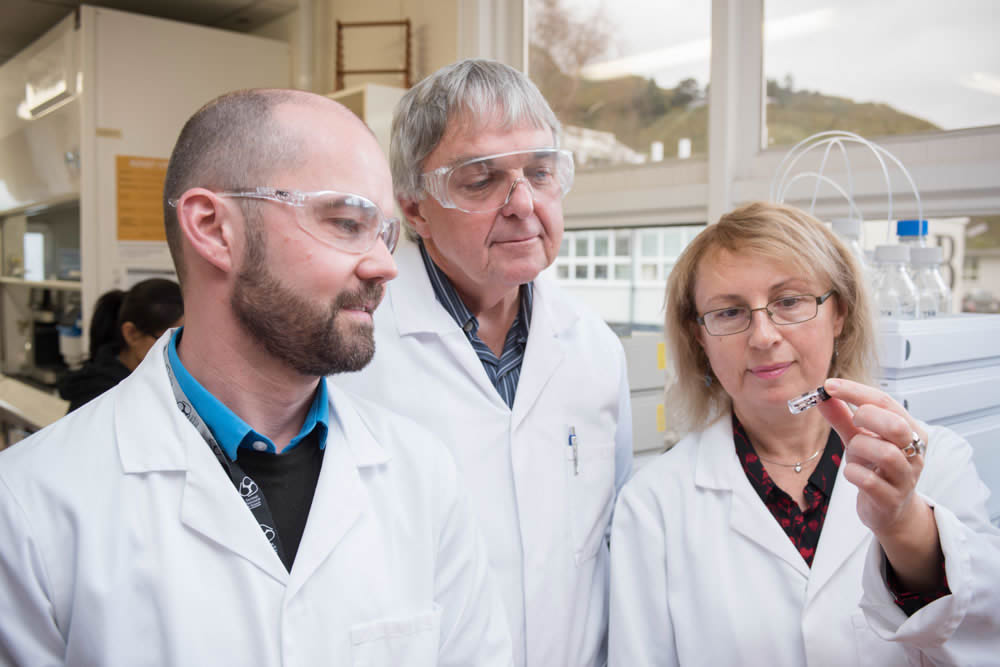 The funding will be used to develop drug candidates discovered from research the team has been working on since 2008.

Alzheimer's disease affects over 10 million people in the developed economies and is increasing in prevalence due to aging populations.

The drug candidates being developed at Victoria University of Wellington, in collaboration with the University of Liverpool, are a novel class of inhibitors that target the biological machinery that causes damaging plaques to form in the brain, leading to the progressive memory loss that is characteristic of Alzheimer's disease.

The scientists have discovered how to make small complex sugars called heparan sulfates chemically in the lab. These can control the degradation of proteins in the brain that cause memory loss.

"Some of these molecules have the ability to target an enzyme that creates small toxic compounds, the beta-amyloid plaques, in the brain believed to be responsible for Alzheimer's disease," says Dr Zubkova. Dr James Hutchinson, Commercialisation Manager of KiwiNet says, "The enzymes that make beta-amyloid plaques appear to be the main culprits that damage the brain in Alzheimer's disease. The scientists at Victoria University have found the "Achilles Heel" of the enzyme and have designed a drug that blocks the enzyme machinery, stopping it from making the damaging plaques. This home-grown technology promises to provide a much-needed breakthrough for the millions of people affected by Alzheimer's disease world-wide, with the potential to reach a US$6.8 billion global market."

"KiwiNet will provide commercialisation support alongside the investment, as we do with all our PreSeed investment projects. In addition to having the potential to have a major global health impact, this technology could help generate millions of dollars in returns to the New Zealand economy, both through export earnings and driving job creation in New Zealand's biotech sector," says Dr Hutchinson.

In June 2016 the Kiwi Innovation Network (KiwiNet), was awarded $10.3 million of new investment from the Ministry of Business, Innovation and Employment's PreSeed Accelerator Fund to help transform cutting edge science into commercial reality.